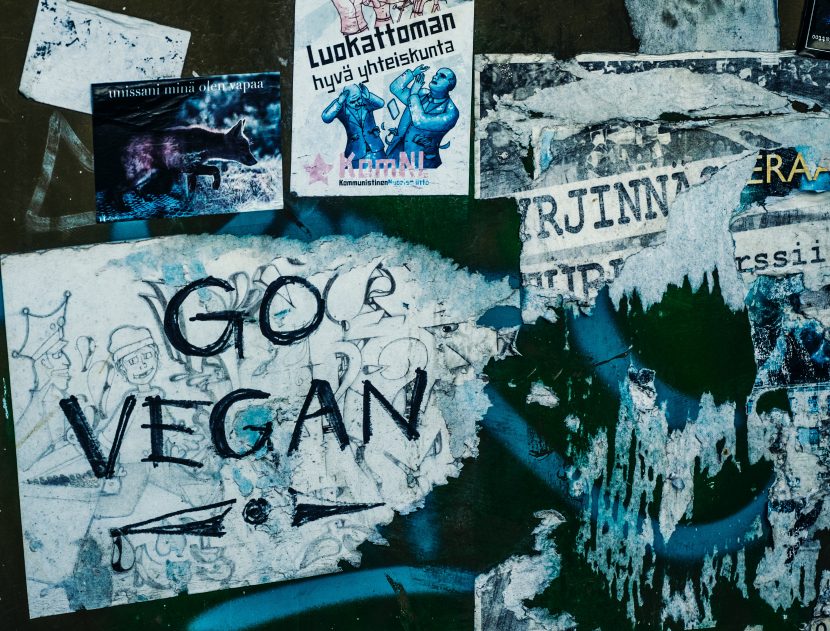 It doesn’t matter if you went vegan yesterday, 2 months ago or years back (even if you just had your first vegan meal, that’s cool – because it’s never to late :)) you are doing an amazing job at saving so many animal lives.

I sometimes hear people doubting my decisions and saying that one vegan more or less does not make an impact. But what if there were 200 people who stand up against those beliefs and make plant based food choices every day, does this have an impact? Hell yes it does. So never believe you are alone and what you do doesn’t matter; because that’s completely nonsense! Every single person makes an impact

Please don’t understand this post wrong: You don’t have to do any of those bullets, but if you want to take your food choices a step further, here you have some ideas:

This is probably the easiest way since you don’t actively have to do anything. Every time someone asks, why you chose to eat that way (or even jokes about it) be polite, tell them shortly a few good facts and see what happens. Usually people can be put in two categories:

Unfortunately those people are rare. But if you happen to meet one of them, you can go deeper into detail, ask questions, see their point of view and help them to see the benefits of a vegan diet.

You will notice that a lot of them, without you saying anything, will justify their eating choices. They will say something like “I could never give up meat, cheese, … But I only buy free ranged eggs/ the meat from cows that had a good life.”

My tip here: Smile and move on. They are not ready (I don’t mean this in a bad way)

When you’re the only vegan in your family or among your friends, it sometimes (especially in the beginning) can be hard to stand straight for it. You made this choice to stop animals from suffering, lose some weight, gain back your health, … Whatever  your reasons were, they came from a positive origin; so why should you hide them?

I know this is not always easy, but trying is what gets you there 🙂  When I first went vegan, I often just had a jar of pre-cooked beans, some cucumber sticks and bread for lunch…not very creative, nor very diverse. But once I got more confident in cooking, I started to prepare, still very easy meals yet they looked more than just a boring dish where someone forgot the meat or cheese.

My friends started asking what this or that was, how I made it and wanted to try. One time I invited a bunch of them over for a vegan brunch; they were surprised at how good the food tasted and how much of a variety there is.

I’m not telling you to host big cook parties, become a master vegan chef or never eat a “boring meal” again. But I found this definitely a great way to raise awareness.

If you are looking for some simple, yet delicous food ideas, I created a recipe book called the Veganning. It is designed for those who are just starting out, looking for some inspiration, ideas, guidance and help (the book is set up with 3 recipes per day for the first 30 days), those who already are experienced but running out of recipes, those who simply like pictures (hehe), and those who are well experienced, looking to switch it up a bit – so you see… it is for everyone 😉

1. Talk, engage, participate, get active. It is for sure a great option to speak about it to your friends/family/co-workers in real life, join campaigns, or like, comment or reposts vegan recipes, quotes, plant based dishes, news in the vegan scene,… on your social media, but I would definitely advice to keep them moderate. If the only thing you talk about, or the numbers of your posts get to a point where people just are annoyed with you, you might cause the complete opposite of what you were trying to do.

2. But while you try not to push the people who show no interest too much, you could make new friends who got the same motivation as you. Remember, there are so many other vegans that think exactly the same way.

You could host events, share news, help people get started, lend each other books, invite each other to your Saturday brunch, … and come up with your own ideas 🙂

3. I partnered up with a brand that let’s you design your own shirts, bags, hats…. I created a few items with vegan words, quotes, sayings,… on them. Every one of us gets dressed each morning; imagine the impact that messages on shirt or sweaters could have: so many people look at us each day, and without you doing anything you could bring a lot of awareness towards veganism.

Maybe you’ve already been to my shop, if not take a look and see if that’s a way you would like to contribute to spreading the vegan message.

I hope a few of those ideas were helpful. If you got any other ideas, stories or things you would like to share concerning spreading the vegan message, I would love to read from you down in the comments below. 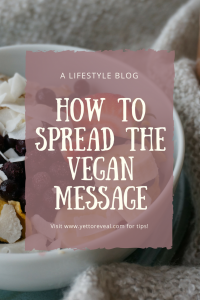